Home » BH Series Number Plates: Everything you need to know

The Ministry of Road Transport and Highways began car registration under the newly announced BH-series (Bharat-series) number plates for non-transport vehicles in September 2021. The government established the BH-series to facilitate national mobility. This article will describe what a BH number plate is, its benefits and drawbacks, and how to obtain one.

What is the BH series number plate?

The Government of India’s new law intends to reduce his inconvenience by introducing BH series registration plates, where the BH stands for Bharat. These plates will be useful for people who frequently drive from one state to another. Beginning on September 15, 2021, BH series license plates can be registered online. 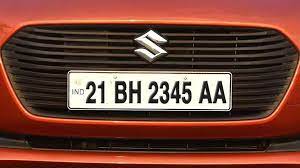 The BH number plate differs from the general number plate format. The revised format of the BH series is as follows: YY BH #### XX, where YY represents for the year of registration, BH stands for the Bharat series, #### stands for random digits between 0000 and 9999, and XX stands for the letters AA to ZZ.

Sadly, such registration plates are not available to everyone. It is open to defence personnel, central government officials, state government workers, and central/state PSUs since it is meant for those who often travel across states. Furthermore, private firms with operations in more than five states/UTs can obtain such plates for their workers’ automobiles.

How can you get your BH series number?

If you qualify for the BH number plate, you may obtain it for your new vehicle by following a straightforward procedure. A copy of your official ID card (for government personnel) or your working certificate in Form 60 (for private employees) must be sent to your dealer. The dealer will next apply for a registration number for your vehicle, which you will get in a few days. The dealership will attach the number plate after you have taken receipt of the vehicle.

What are the benefits?

What are the changes in the taxation structure for the BH series?

According to it, owners of vehicles worth less than ten lakh rupees must pay an 8% road tax. However, if the car costs between 10 and 20 lakh, the owner must pay a 10% road tax. Likewise, if the car costs more than twenty lakh, the owners must pay a twelve percent road tax. The taxes also varies depending on the power source of the vehicle. Diesel-powered cars are subject to a 2% surcharge on their tax, regardless of price category. A car with an electric engine, on the other hand, saves the owner 2% in taxes.